The concept of “lodging” is quite interesting. In Bangla literature ‘lodging master’ is an oft-mentioned character. Social documents and biographies regularly reveal that well known scholars and high achievers often stayed as lodgers at some point at their lives. Traditionally, these lodging arrangements (perhaps inaccurately referred as “jayegir” as well) meant these students/ job seekers would stay at a patron or sponsor’s home while they study/ look for job. Lodgers would be determined and ambitious enough to leave their small hometown behind to pursue higher and quality education and better job; often concentrated in the cities. They would often arrive hoping their patron’s well established social status and network would help them land a suitable employment. Being academically inclined and in exchange of the patron’s favor, he would teach Math (or English or whatever ‘hard’ subject there may be )to the children of the household or help with errands inside and outside the house. In case of female lodgers, the purpose of the sojourn may differ from one in pursuit of employment to a better husband. These lodgers may or may not be of blood relation, sometimes they may be village relation. Sometimes the only thread between a sponsor and a lodger is a common acquaintance. There were also abuse of the system from both parties from dangerous liaisons to mistreatment by the family but mostly they have been beneficial for both.

What seems to be so fascinating about this now extinct practice is its generosity-the generosity on the sponsor’s part on taking up such responsibility, generosity on the landlady’s part since she would be the one left with the mundane details of hosting an additional person, generosity on the rest of the family’s part since they would have to embrace an outsider as their own and share whatever resources are available. This arrangement has helped propel many people forward with limited access; who would have otherwise been lost in the statistics.

So what happened to it? Do youngsters now value freedom and independence more than living with an unknown family? Or they prefer self-supporting with multiple tutoring while living in a “mess” than to hand out control to some protected arrangement. Is the issue from the patron’s side then? I do not really believe the notion that this is a particularly ungenerous time. Is it the weight of assuming the responsibility of a young individual? Or the risk factor (sexual predatory, theft) associated with essentially opening the door to a stranger? We employ unknown domestic help so that cannot be a key factor. Or is it the mental image of a lungi-clad seductress gracing the living room mid afternoon? Is it the lack of space? Or the logistics?

With all things considered, the tradition of ‘lodging master’ still seems to be one that merits preservation and Interior Design can help resolve the issue of space and logistics to some extent, depending on situation. Here are some solutions for sleeping, studying and storage that could be plopped down in the modern, urban living room. They are chosen and designed based on the fact that they are simple in construction and material as well as feasible in Dhaka with its adequate supply of relatively affordable, skilled labor.

1. A simple,thin roll out mattress.Better when there is an additional layer underneath, like carpet.

2.Three foam bed.I believe Jatra carries a version of this.

3. Japanese roll out mattress.Little more customized since it is stitched in an interval for easy fold. 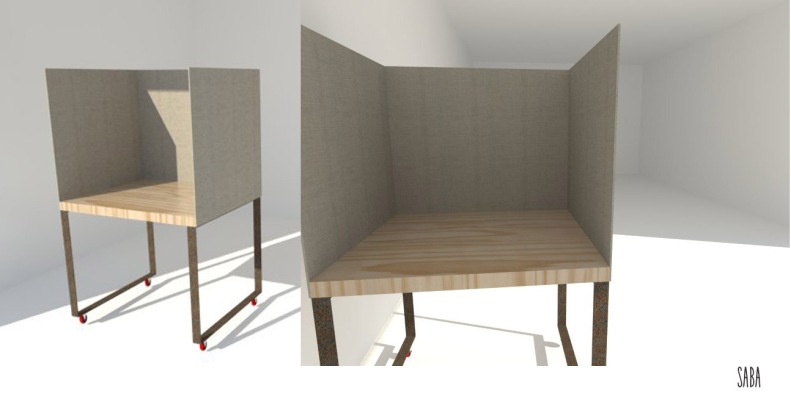 A study corner can be curved out with this simple surround panel desk. The upholstered (a fancy word for plywood wrapped in soft,padded material,similar to a blanket) sides provide complete visual and partial acoustical separation. Casters for easy move from one place to another. 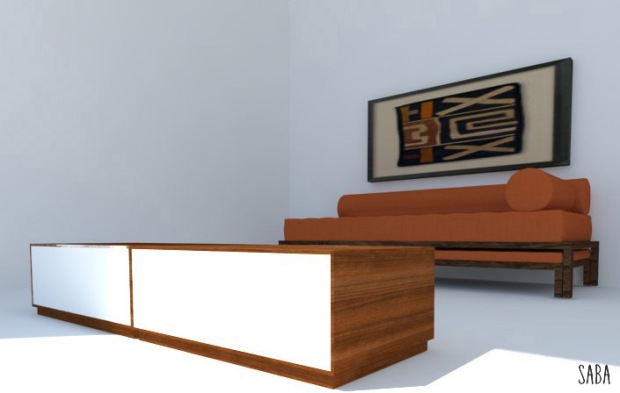 The issue of storage can be addressed with two drawers placed side by side in lieu of usual coffee table. Not a generous amount of storage but edited living is an art.

The above solutions are all decorative, meaning solutions based solely on innovative furnishing. These are enough to host the new generation of lodging masters; who has scored golden GPA while working 8 hours in the field with his peasant parent and hopes to and has full potential to attend Dhaka Medical College.

Though extremely useful, these are solutions for when the space is already built. Further acoustical privacy during study time, issue of shared bathroom, kitchen logistics are best resolved if a designer is involved during the planning and building phase. These needs can be better addressed with built-in, tailored, streamlined solutions. This is a good indication as to when to hire an interior decorator  or an interior designer or an architect. Nonetheless, these solutions can help retrieve the bygone generosity in urban quarters. Who knows, they might bring back the lost breed of selfless educators that our country so desperately needs.